The longer a teenager plops down to watch television the more likely it is that teen will be drinking more sugary sodas or energy drinks at some point throughout the day, a new study suggests. Each hour per day of watching TV and using other electronic devices increases the risk of exceeding the recommended daily intake of added sugars, placing that teen at risk of having overweight and obesity.

That matters for cancer risk because children with overweight and obesity are more likely to grow into adults with the same conditions. For adults, having excess body fat is a major risk factor for at least a dozen cancers, including breast, colorectal and esophageal.

The study was published in PLOS ONE. 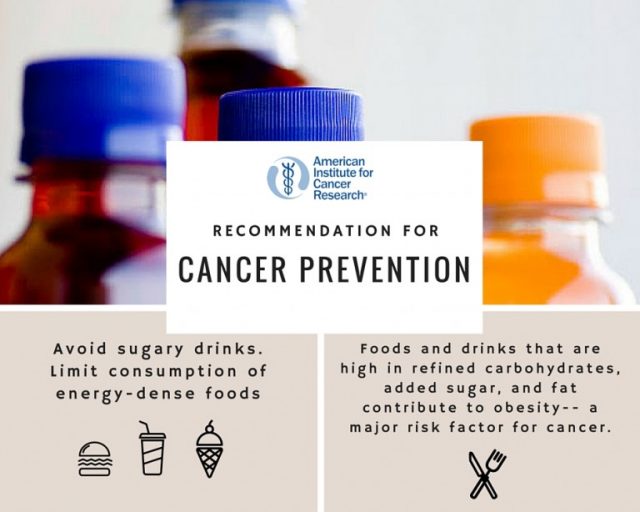 Today, about one-third of US children and teenagers are overweight, and the rate of obesity has tripled over the past four decades. AICR research and other organizations has long linked sugary drinks with increased risk of gaining weight and having overweight.

For the study, researchers pulled data from 2013-2016 from an annual national survey of eighth and tenth graders. About 32,000 students had reported their TV, phone, computer, video games, and other electronic use habits annually, along with their beverage intake and other information.

Similar to what other research has pointed to, the study found soda and energy drink consumption decreased slightly each year from 2013 through 2016; daily use of electronic devices remained stable. Overall, the more teenagers used their electronic devices the greater their intake of sugary beverages. The link was strongest with television, which accounted for the largest chunk of electronic use. Each hour of TV watching linked to a 32 percent higher risk of exceeding health recommendations for sugar intake and a 7-gram increase in sugar. On average, the adolescents were watching (or streaming) about two hours of TV a day.

Each hour of playing video games, talking on a cellphone and social media use were, together, also associated with more daily added sugar intake and increased risk of exceeding sugar recommendations.

Caffeine intake from beverages was also higher with increasing electronic device use.

But there was good news for the students who enjoy schoolwork. Using a computer for school was the only electronic device linked to a lower risk of having too much added sugar.

This study only shows a connection between electronic use and sugar intake from beverages: the survey did not ask if the teens were consuming these beverages while watching a show, talking on their phone or using other devices.

“Previous studies have suggested that there is higher distracted eating while watching TV — and perhaps the relationship we see may be related to this phenomenon. But this study does not address this directly,” said lead author Katherine Morrison, MD, a pediatrician at McMaster and California State University, Fullerton.

Like all self-reported data, misreporting is a possible limitation to this study. Also, the sources of the sugar – and caffeine – were limited to soda and energy drinks. Multitasking on the various devices is also possible.

Yet, the data is one step towards helping families and health professionals better understand adolescents’ behavior patterns with beverage intake.

“As a pediatrician, my take away is to remind parents about the importance of reducing intakes of soda and of energy drinks. Modeling this behavior at home is important,” said Morrison. “Although we do not know this results from distracted drinking of calories while watching TV — I am now prompted to address this more directly in my clinic conversations with families. If the family wants to make changes, it is more useful to be able to identify the specifics of what is happening around the time that behaviors are occurring.”

AICR Director of Nutrition Programs Sheena P. Swanner MS, RDN, offers these strategies to help you and the teens in your life cut down on sugary drinks: “Keep the fridge stocked with healthy alternatives. Water bottles, sparkling water, or pitchers of fruit infused water make a good choice. You can make flavored ice cubes with juice, tea or chopped fruit and get creative with a hydrating drink that can easily replace soda and other sweet drinks.”

“The important thing is to have these items readily available and in eyesight/easy to grab versus having sugary drinks as an option,” she said. “Instilling the importance of both a healthy diet and an active lifestyle at a young age can help teens maintain a healthy weight into adulthood which is key for cancer prevention.”

The PLOS ONE study was funded, in part, by a grant to KMM by the McMaster Children’s Hospital Foundation.