Research shows that eating high amounts of red meat increases risk of colorectal cancer, possibly because it may spur inflammation. A new animal study published in The Proceedings of the National Academies of Sciences now points to a sugar molecule found in red meat as one mechanism responsible. 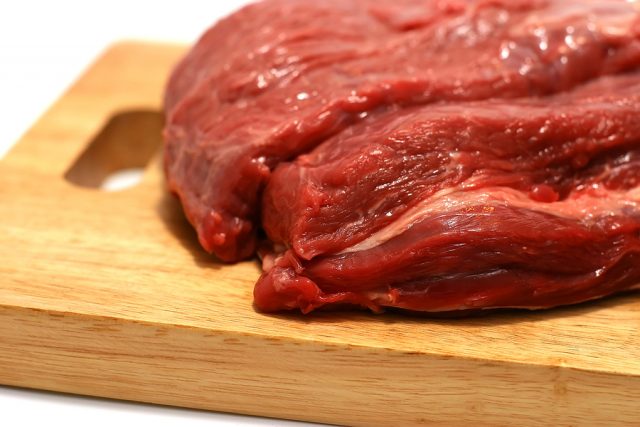 The molecule called N-glycolylneuraminic acid, or Neu5Gc for short, sticks to the ends of sugars found in red meats such as beef, pork, and lamb. Although most mammals produce Neu5Gc, humans don’t. Humans are “immunized” against Neu5Gc shortly after birth by an unusual process involving gut bacteria. As a result, when people eat foods that contain Neu5Gc, we produce antibodies that react to Neu5Gc, triggering inflammation.

In foods, Neu5Gc can be free or it can be bound to the ends of long sugar chains attached to proteins. The bound form is highly bioavailable, meaning it can easily be taken up into the body’s cells. Neu5Gc tends to accumulate in cells of the colon, prostate, and ovary.

In the study, the researchers first assessed the Neu5Gc content in 62 commonly eaten foods, including dairy products, red meats, poultry, seafood, fruits, and vegetables. Whereas red meats had the highest amount of Neu5Gc, poultry, seafood (except caviar), fruits, and vegetables had none. Beef had the highest levels of all the categories of red meat. Cow’s milk had very little Neu5Gc but cheeses from cow’s milk or goat’s milk had levels comparable to red meats.

Cooking had no effect on Neu5Gc levels.

Then, using a special kind of mice that can’t produce Neu5Gc, they gauged the effect of dietary Neu5Gc on inflammation and tumors.  For twelve weeks, they fed the Neu5Gc-deficient mice one of two diets – a Neu5Gc-free diet or a Neu5Gc-rich diet. (Mice have a shorter lifespan than humans so a 12-week Neu5Gc-rich diet simulated a human diet rich in red meat for many years.)

At the end of the 12-week period, they injected some of the mice with Neu5Gc antibodies, to mirror the antibody response of humans. It was only the mice that received both the Neu5Gc-rich diet and the antibodies that showed evidence of systemic inflammation.

Next, they fed a group of specialized mice either a Neu5Gc-rich diet or Neu5Gc-poor diet (control).  The mice were prone to developing liver tumors and immunized against Neu5Gc to mimic human-like Neu5Gc immunity and the antibody response.

The mice consuming the Neu5Gc-rich diet had higher levels of inflammatory proteins, more lesions on their livers and eventually, more liver cancer than the animals eating no Neu5Gc.

In a similar experiment that was longer (85 weeks),  mice that ate the Neu5Gc-rich diet and were immunized against Neu5Gc were five times more likely to develop liver tumors than non-immunized mice eating no Neu5Gc.

The researchers admit it’s difficult to apply the results of this study to humans because, unlike the mice, humans eat a varied diet and levels of Neu5Gc antibodies can vary from person to person. But the study does show some similarities to the situation in which people eat a diet high in red meat and, as a result, have higher rates of cancer, especially colorectal cancer.

More study is needed to determine exactly how eating red meat contributes to cancer risk. In the meantime, AICR recommends limiting consumption of red meat to 18 ounces (cooked) per week. That’s roughly equivalent to a small lean hamburger or a small steak filet once a day.

This study was funded by a Samuel and Ruth Engelberg Fellowship from the Cancer Research Institute (to O.M.T.P.), the Swiss National Science Foundation (H.L.), the Ellison Medical Foundation (A.V.), and NIH Grant R01CA38701 (to A.V.).

Teresa L. Johnson, MSPH, RDN, is a nutrition and health communications consultant with a long-time interest in the role of plant-based diets and cancer prevention. Her work draws on elements of nutritional biochemistry, phytochemistry, toxicology, and epidemiology.

2 comments on “Study Gives New Insights on Red Meat, a Sugar, and Cancer”