Alcohol – especially wine – has an image as a heart-healthy choice, and fewer than 4 in 10 people are aware that alcohol poses a cancer risk. But it does, and the link should be of special concern to women since increased breast cancer risk starts at relatively low amounts of alcohol. Guidelines focused on heart health emphasize that you should not drink alcohol specifically in hopes of cardiovascular benefits.

The evidence is stronger than ever linking alcohol to increased risk of breast cancer. In the U.S., one standard drink is defined as one providing 14 grams of pure alcohol (ethanol). That is equivalent to 5 ounces of wine, 12 ounces of beer or a 1 ½-ounce shot of 80-proof liquor. Just 10 grams of pure alcohol consumed daily raises the risk of premenopausal breast cancer 5 percent, and the risk of postmenopausal breast cancer 9 percent.

While the risk of breast and esophageal cancers increases at even low levels of consumption, alcohol beyond moderation also raises the risk of cancers of the colorectum, stomach, liver, mouth, pharynx, and larynx.

Increased circulating estrogen seems to be an important reason for alcohol’s link to breast cancer, and explains why the risk of Estrogen Receptor-positive breast cancer (the most common form) particularly rises with alcohol consumption. Women often ask about whether certain foods may be “estrogenic,” yet completely overlook this effect of alcohol.

DNA damage can occur from the free radicals formed as alcohol is metabolized, forming acetaldehyde, a recognized carcinogen. Alcohol may also act as a solvent, increasing other carcinogens’ ability to damage cells. 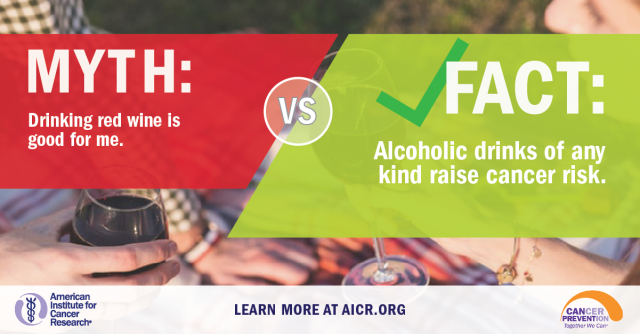 In observational studies that follow large groups of people for many years, those who drink moderate amounts of alcohol have a lower risk of heart disease compared to people who drink large amounts and compared to those who don’t drink alcohol. However, in observational studies like these, which can’t establish cause-and-effect, some of the people with little or no alcohol consumption are people who have health problems that led them to avoid alcohol.

A closer look shows that alcohol actually stands on a thin line when it comes to heart health: Blood triglyceride levels can rise with too much alcohol. People often focus on potential benefit in reports that alcohol can raise HDL (“good”) cholesterol. However, high blood triglycerides raise heart disease risk, and too much alcohol can send these up.

Blood pressure may rise with excessive alcohol. For most people, one to two drinks a day don’t pose a problem for blood pressure, but drinking more than two or three standard drinks a day can raise it. Healthy blood pressure plays an enormous role in heart health, so if you are having trouble keeping yours under control, discuss with your healthcare provider whether you should try reducing alcohol. Each standard size alcoholic drink contains at least 100 to 150 calories from the alcoholic beverage itself, and mixers in cocktails can add even more. Many people find that after a drink or two, they are less likely to withstand impulses to indulge in foods or portion sizes that they would normally be more cautious about limiting, leading to a further increase in calorie consumption.

What is moderate drinking? The same amount of alcohol poses more risk for women because differences in alcohol-metabolizing enzymes and total body water make alcohol more concentrated in the blood and more slowly eliminated.

Despite some differences in how alcohol affects the risk of heart disease and cancer, there is agreement about a commonsense approach. Guidelines focused on heart health emphasize that you should not drink alcohol specifically in hopes of cardiovascular benefits.

Whether focused on heart health or lower cancer risk, recommendations agree that for those who choose to drink, it is best if women limit themselves to no more than one alcoholic drink per day, and men to no more than two.