We often hear about studies that get widely covered in the media showing the potential of certain foods with antioxidants preventing and repairing damage from oxidative stress, and about foods that can help lower cancer risk generally.

As you consider news about studies suggesting that our food and drink choices may influence expression of our genes, and the population and activities of microbes in the gut, look through the lens of the bigger picture of research on ways we can reduce cancer risk.

AICR’s recommendation to eat a diet rich in whole grains, vegetables, fruits and beans is based on today’s best available evidence. That includes both high-quality population studies that span multiple years, as well as controlled trials that provide evidence of a plausible mechanism, meaning that realistic human eating choices lead to relevant differences in cancer risk.

So, the message isn’t an “instead” message. It’s a “yes, and” message. In addition to how making a variety of nutrient- and fiber-rich plant foods the centerpiece of your plate each time you eat can provide cancer-protective nutrients and support efforts to avoid weight gain, it looks like those same choices may also help reduce cancer risk in other ways. 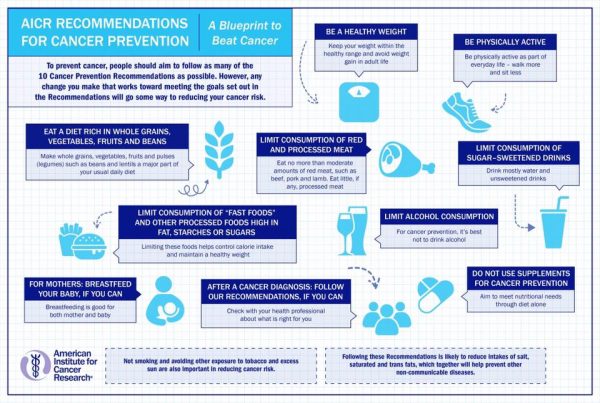 Now mounting research shows that protection may also come in other forms. Two potential contributions involve influences on the microbes in your gut and on how genes are expressed or silenced. So far, cancer protection through these paths is supported mainly by studies in isolated cells and animals. It is smart not to over-rely on them for protection, and to look at them within the context of overall healthy eating.

Changing What Your Genes Say

It is true that some of the DNA are actively involved in making important body proteins. At one time, scientists didn’t understand what the rest of our DNA did. But now they are discovering that the job of much of our DNA involves either turning on or silencing the expression of genes. And emerging research is exploring how compounds found in food might dial down expression of oncogenes (genes that have potential to cause increased cell growth that can lead to cancer) and increase expression of tumor suppressor genes.

Some of the compounds that show this potential in cell and rodent studies include allyl compounds (from the garlic-onion family), EGCG (found in tea), isoflavones (found in soyfoods), lycopene (found in tomatoes), and sulforaphane and related compounds (found in cruciferous vegetables like broccoli). Phytochemicals like apigenin, quercetin and other polyphenols are found in a variety of fruits and vegetables . And laboratory studies also show similar roles for DHA (an omega-3 fatty acid found in fish and algae) and butyrate (formed from fiber by the bacteria in the colon).

Feeding You and Your Microbes

Genes belonging to bacteria living in our gut far outnumber our human genes. And mounting evidence suggests that the types of bacteria and other microbes that live in our gut, and the amount of variation in their population, may influence health, including risk of cancer. People differ in the types of microbes that inhabit their digestive tract due to genetic differences and as a result of diet, lifestyle and environment.

A prebiotic is a substance that supports growth of specific microbes that provide a health benefit for humans. Evidence of prebiotic effects is strongest for certain carbohydrate compounds that are found in artichokes, onions, pulses (like dried beans and lentils), asparagus and bananas. In addition, some forms of dietary fiber can be fermented by gut bacteria to produce short-chain fatty acids (SCFA) that nurture the cells lining the colon and help strengthen the barrier that protects colon cells. These fermentable fibers can be found in oats, barley, mushrooms, and some fruits (including peaches, apples, pears and raisins).

Pulses are an excellent source of resistant starch. Because it’s hard for our digestive enzymes to break down, it tends to pass along to the colon, where gut bacteria use it to form health-promoting SCFAs. Emerging research suggests that polyphenol compounds in plant foods like berries, walnuts, tea and coffee may also help nurture a health-promoting gut microbiome.

It might sound like these studies provide the recipe for eating habits to powerfully reduce cancer risk. But looking only at potential protection specifically from influences on gene expression and gut bacteria, the evidence is not yet strong enough to serve as a basis for healthy eating strategies.

• Effects on gene expression and cell growth that can lead to cancer have mainly been seen in studies of isolated cells and rodents. Evidence in humans is scant, and results are inconsistent.

• For practical reasons, controlled clinical trials in humans often involve high amounts of dietary compounds given over a relatively short time, compared to the many years it takes for most cancers to develop. These trials have generally not shown a protective effect. It’s possible that if consumed over a longer time, these compounds would show a protective effect from ongoing exposure to small amounts found in foods. But we don’t know that, and we don’t have evidence to create strategies based on gene expression alone.

• Many of the cell studies supply these natural plant compounds directly to cells. But these compounds are big, complex substances that our body can’t absorb out of the gut until they’re broken down to smaller compounds. So these cell studies don’t represent what happens in our body as the newly created compounds travel through the blood and reach body cells.

• People differ from one another in the amounts and types of compounds they form from plant food. For example, ellagic acid in berries and walnuts is converted to urolithins by gut bacteria. But individual genetic and gut microbiota differences lead to production of different types and amounts of urolithin compounds that may provide beneficial effects in body cells after they are absorbed.

This research is still emerging, so don’t take rash actions based on random headlines. Stay focused on the big picture and stay tuned here for updates.