WASHINGTON, DC — Because chronic inflammation is linked to increased risk for many cancers and other disorders, scientists have developed a tool to evaluate an individual’s diet for its potential to increase or decrease inflammation. In new research presented today at the American Institute for Cancer Research (AICR) Annual Research Conference, researchers presented results showing that diets high in fiber, spices, healthy fats and carotenoids all contribute to an anti-inflammatory effect that links to reduced risk of colorectal cancer.

In addition to many cancers, chronic inflammation appears to play a key role in the development of metabolic syndrome and its related diseases. Today’s research builds on an inflammatory index of food and food components developed by University of South Carolina (USC) researchers.

“We know inflammation is important in carcinogenesis because experimental data support this mechanism and the use of anti-inflammatory drugs is protective,” says Susan E. Steck, PhD, MPH, RD, University of South Carolina Associate Professor and co-author of the new studies. “Now we’re starting to see that diet influences inflammation and that the inflammatory potential of the diet is associated with colorectal cancer.” 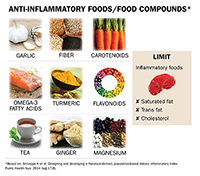 The dietary inflammatory index includes 45 foods, nutrients and phytochemicals. It was first developed five years ago using a global literature review of studies investigating the role of foods on one or more of six inflammatory markers, including C-reactive protein (CRP). At that time, the index based its inflammatory ranking on almost 1,000 studies.

Last year researchers updated and strengthened the inflammatory index by including 1,943 studies published through December 2010. Saturated fat and trans fat rank among the top nutrients on the pro-inflammatory list; fiber, carotenoids, turmeric, ginger and flavonoids at the bottom.

The recent study scored the inflammatory potential of 34,703 women’s diets who were part of the Iowa Women’s Health Study. Women were ages 55 to 69 and cancer free when they reported their dietary intake. By the end of 2010, 1,636 of the women were diagnosed with colorectal cancers, including 1,329 colon and 325 rectal cancers.

Green leafy vegetables, fish, fruit, nuts and whole grains were among the top foods more commonly consumed among the anti-inflammatory diet group. Food groups that were similar between the pro- and anti-inflammatory groups include refined grains, high-fat dairy, and chocolate.

The study was published in Cancer Epidemiology Biomarkers and Prevention.

“This confirms other work we have conducted on the inflammatory potential of the diet and what is known about how systemic inflammation plays a role in colorectal cancers,” says Steck.

Another study published last month by the USC team found that a group of police officers eating the most pro-inflammatory diet were more likely to have risk factors associated with risk of heart disease and poor metabolic health compared to those consuming an anti-inflammatory diet.

Currently, the team is developing the index as a tool for health professionals and then for consumers, says Steck.

“The index takes into account the whole diet,” says Steck. “For example, if someone regularly consumes red meat but also a lot of fruits and vegetables, they might balance each other out in terms of pro- and anti-inflammatory factors.”

“Now, we know that consuming more fruits and vegetables, which are high in flavonoids and carotenoids, and moving toward a more plant-based diet will improve your dietary inflammatory index score and translate into anti-inflammatory effects.”