“You are running not just for yourself, you are running to make a difference in the lives of others,” says Marie Ortiz, who has run over 40 marathons since 2007 and in that time, she has battled breast cancer twice. This April, she will be running the London Marathon as part of TeamAICR. Here, Ortiz, a mother of four, shares her motivating story and why she has persistently strived over the years to run with TeamAICR.

What motivated you to start running marathons?

I ran in high school and college but after I had my first child in 1994, it was really hard for me to fit exercise in to my schedule. But, I resumed. Running was an activity where, at any given time, I could just put on my shoes and go for a run. My husband said, “you are always running and you are always doing these short little races and winning. Why don’t you challenge yourself a bit more and try doing a half or full marathon?” So, I signed up for a half marathon, and then a full marathon. I think my husband thought it was a one-and-done bucket list check off thing. But I thought to myself, wow, I really like this!

What led you to want to run with TeamAICR?

My diagnosis is the reason I signed up. When I was first diagnosed with cancer, I thought it is very important for people to know to get their mammogram done and also to eat well and exercise. Cancer research is also very near and dear to my heart.

Did you keep running after the diagnosis?

Yes. All my doctors encouraged me to keep running to an extent while I was going through [treatment]. I was going through radiation when I was supposed to run the marathon with TeamAICR in 2013 but my doctors said I would be too worn out to train. There is a big difference between running 3-5 miles and 26.2 miles. 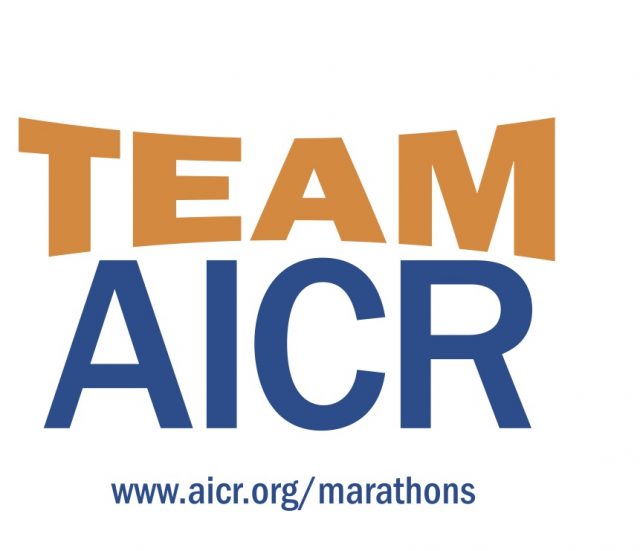 So, you planned to run a marathon with TeamAICR the following year?

What happened is that I came back from my sick leave to a job that I had excelled at for 15 years. I am a salesperson and because I was sick, I had not met my sales quota. I came back in May and by July I was told that I was not going to have a job. It was really, really difficult. I did not have work and I was still being treated for cancer. I got a new job and since I was just starting, I did not feel I could take off time to run for TeamAICR and so I wanted to participate the following year. Then I was diagnosed with cancer for the second time in my other breast.

Are you done with treatment now?

Yes, I am done with active treatment and I feel great.

Did activity help you with your treatment and recovery?

Yes, yes, and more yes! Mentally, it helped me with focus, and physically, once I got a little healthier, I was able to get back into my routine a lot quicker than if I had said, well I am not going to do anything. During my first occurrence, my mom became ill. I stayed at the hospital with her every single day. The tenth day, my mom passed away as I was driving to the hospital to have my lumpectomy. My doctor asked if I still wanted to do the surgery and I said, “she would want me to do this.” It was very difficult to go through those things at the same time. It was extremely important, both physically and mentally, for me to continue to run to relieve the stress. When I got breast cancer the second time I had a double mastectomy and the doctor said to my daughter: “you are so lucky you have a healthy mom because the surgery was so much easier than it would have been had she not kept herself in shape and ate right. It was a much easier surgery due to the fact that she did that.” It was kind of like a message to my daughter to follow that example because you never know.

With everything you have been through, how have you – and do you – fit in running?

I always do my long run (18-22 miles) early on a Saturday morning, usually before my kids are even out of bed. On Sunday, I will do an easier, shorter run and then during the week, I do one easy, one tempo, and one speed workout. My daughter is a soccer player so if she has practice I will go with her and use the track, or I will just fit runs in along the way. Since I work from home, I go out for a quick run to alleviate stress during the day.

What would you say to that person who wants to start being active and is having a hard time?

[Running] with a group is a great motivation. If you know somebody is waiting for you, there is a lot more incentive to get up in the morning and get going. Once you start seeing the progress, you just build on it. Take it slow and build up to where you need to be. I have seen so many people do it.

It has been really great to reach out and help women diagnosed with cancer and tell them that okay, if you have radiation, here is the scoop down the line.

One comment on “Marie Ortiz of TeamAICR, winning races and running marathons to inspire others”