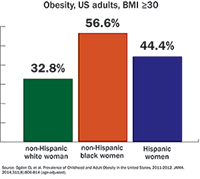 See a larger version of this chart

Announced today in advance of publication at the American Institute for Cancer Research (AICR) Annual Research Conference in Washington, these studies show that associations between body weight and breast cancer risk seen among white women hold true for African American and Hispanic women as well. This is significant because most breast cancer research has been conducted among white women, yet African American and Hispanic women have a higher incidence of the more aggressive types of breast cancer that are more challenging to treat, such as estrogen receptor (ER) negative tumors. They are also more likely to die of the breast cancer than white women.

The first study, published today in Cancer Epidemiology, Biomarkers & Prevention, is the largest of its kind among Hispanic women. Conducted by Esther M. John, PhD, MSPH, Senior Research Scientist at the Cancer Prevention Institute of California, and her colleagues, the study suggests that healthy-weight Hispanic women who gain pounds through adulthood have increased risk for ER and progesterone receptor (PR) positive tumors after menopause.

“We saw that when Hispanic women became overweight or obese, it increased risk of ER and PR positive breast cancer in postmenopausal women. We’ve known this for a long time for white women, but now we are seeing this also in Hispanic women,” John said.

The few previous studies investigating obesity’s link to breast cancer among US Hispanics have been small with inconsistent findings, says John. This large study fills in a lot of missing information about obesity and breast cancer in postmenopausal Hispanic women. 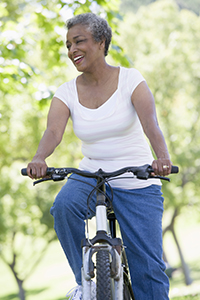 “Breast cancer appears to have different risk factors in younger versus older women but by far, breast cancer is more common among postmenopausal women,” said John. “This has huge implications for not just Hispanics but all women. We cannot change genetics or family history, but we can do something about obesity. You can eat less, choose healthier foods and do more physical activity. It may not that easy but it’s possible. And it’s important for not just lowering breast cancer risk but for many other diseases.”

The other study, by epidemiologist Elisa V. Bandera, MD, PhD, at the Rutgers Cancer Institute of New Jersey and her colleagues analyzed the associations of obesity with different hormone-receptor types among over 15,000 African American women, finding that excess weight is linked with a 31 percent increased of ER positive tumors in postmenopausal Black women.

Examining a total of 2,165 ER positive cases and 1,093 of the more aggressive ER negative cases (including 491 triple negative breast cancers) matched against 12,437 women without cancer, the study also showed that risk is higher for postmenopausal women who were lean as young adults and gained weight in adulthood, with almost double the risk of ER positive tumors.

“Our findings show that, similar to white women, African American postmenopausal women can reduce their risk of ER positive breast cancer by maintaining a healthy weight,” said Bandera. “Yet one study is not enough, we need to know more about what African American women can do to prevent and survive breast cancers of all types, which are often aggressive and deadly.”

In addition to these two lead studies, other research on minority health, cancer, and lifestyle to be presented at the AICR Annual Research Conference include: