The report released today by AICR and the World Cancer Research Fund International (WCRF) reaffirms and strengthens the findings of a previous AICR/WCRF report.

“Esophageal is a major cause of cancer death around the world,” said cancer prevention expert Anne McTiernan, MD, PhD, of the Fred Hutchinson Cancer Research Center and one of the authors of the new report. “The occurrence of one type—adenocarcinoma—is increasing in many countries, particularly where obesity is common. The good news is that by limiting alcohol intake and keeping weight at a healthy level, people can significantly reduce their odds of developing this deadly cancer.” 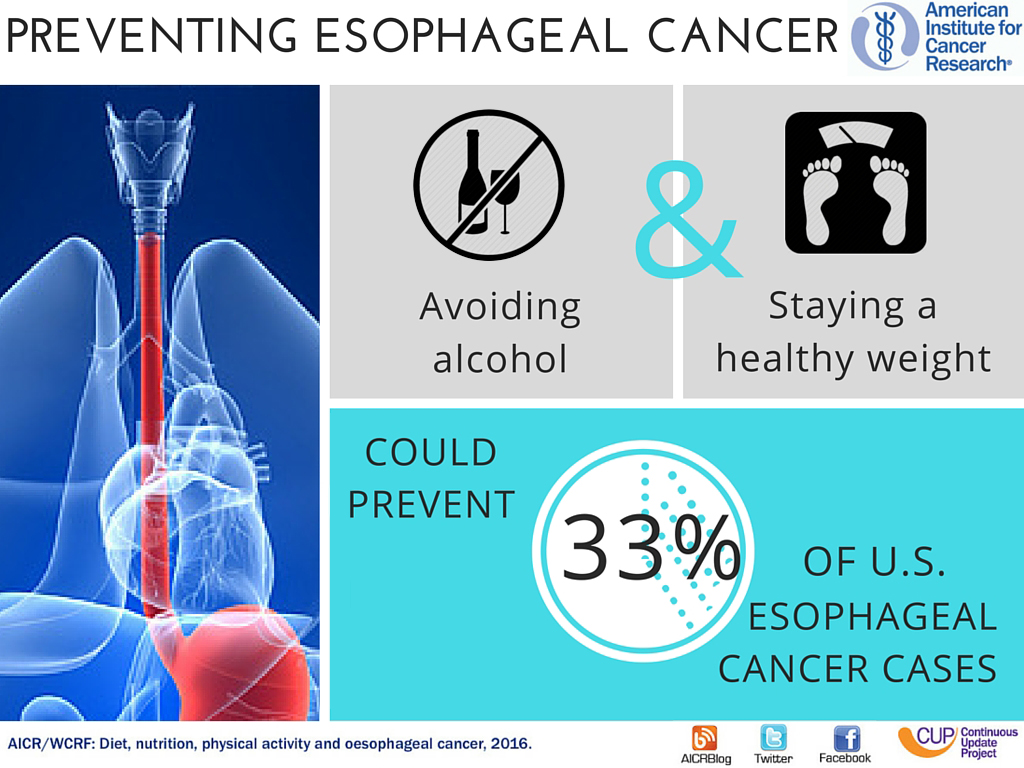 Alice Bender, MS, RDN, Head of Nutrition Programs at AICR, said: “These findings add to the evidence that lifestyle plays a powerful role in cancer risk. Obesity is now linked to eleven types of cancer and alcohol links to six. We want individuals to know you can take important lifestyle steps to reduce risk for many kinds of cancer.”

Adenocarcinomas generally develop in the lower esophagus, starting from cells that make fluid. Approximately six of every ten US esophageal cancer cases (62 percent) are adenocarcinomas.
The report also found strong evidence that consuming alcohol increases the risk of esophageal squamous cell carcinoma – 25 percent increased risk per 10 grams of alcohol per day. This is equivalent to about a glass of beer or wine.

Emerging findings
The report collated and reviewed the 46 scientific studies available on esophageal cancer, diet, physical activity and weight in the first such review since 2007. The research covered 15 million adults of whom 31,000 were diagnosed with esophageal cancer.

The evidence linking fruits and vegetables to esophageal cancer has changed and is now less strong. This does not mean that no link exists, but that there are currently not enough studies to analyze by subtype and smoking status. Eating a wide variety of fruit and vegetables is particularly important to maintain a healthy weight.

“Making smart choices like limiting alcoholic drinks, eating more vegetables, beans and other plant foods, and boosting your activity with walking breaks are all ways to get on a path to lower cancer risk,” added Bender.

Worldwide, esophageal cancer is the sixth most common cause of death from cancer. It is the seventh leading cause of cancer deaths among US men. Survival rates are poor, mainly because these cancers are often diagnosed at a late stage.

Established causes of esophageal cancer include: Gastroesophageal reflux disease (GERD) and Barrett’s esophagus for adenocarcinoma; and Tylosis A, Plummer Vinson syndrome and human papilloma virus (HPV) for squamous cell carcinoma. Smoking increases risk for both types of this cancer.

How to Sift Through Cancer and Nutrition Misinformation on Social Media

One in three of the most popular cancer treatment articles on social media contain misinformation,...

Alcohol consumption led to about three-quarters of a million cancer cases last year, with...

Can the same AICR healthy lifestyle Recommendations that lower the risk of many cancers also help...