Research links people with type 2 diabetes at approximately twice the risk of developing cancers of the liver, pancreas and endometrium. Evidence is weaker but still clear – approximately 20 to 50 percent higher – for cancers of the colon/rectum, post-menopausal breast and bladder. 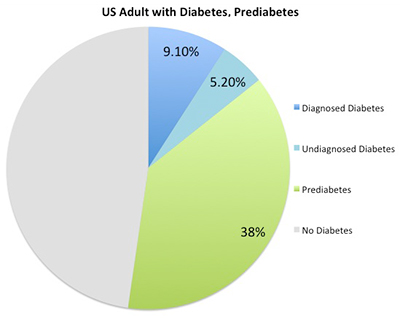 Using one set of measures with the most current available data (2011-12), 14 percent of adults have diabetes. Yet about a third of those with signs of the disease have not been diagnosed. Another set of blood sugar measures puts the figure at 12 percent of adults having diabetes with a quarter of these people having the disease undiagnosed. And another third of adults – slightly more – have prediabetes, a condition that shares many risk factors with common cancers.

Accounting for age, diabetes increased from approximately 10 to 12 percent in the late 1980s to the mid 2000s, where it remained until 2012.

Diabetes cases increased over time in every age group, in both sexes, and in every racial and ethnic group.

The overall increase over the decades may be due to rising rates of obesity, write the authors, a key risk factor for the disease. Obesity is also a key risk factor for increased risk of many of the most common cancers. Along with excess body fat, type 2 diabetes and cancer share several other risk factors, including poor diet and inactivity. High blood sugar is one possible mechanisms linking the two diseases; others include high levels of insulin and inflammation.