Folate Is Best from Foods, Not Pills 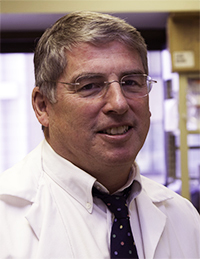 Folate, a type of B vitamin, is found in a variety of plant foods. But Joel Mason, MD, a Tufts University investigator and member of the AICR Annual Conference Program Committee, is examining how much folate may be too much.

Folate plays a key role in the production and growth of cells and tissues. It helps to produce the units that make up the DNA in every cell in our bodies and amino acids that make up protein.

Getting enough folate is especially important for pregnant women to avoid birth defects. That’s why the US government mandated, in 1998, fortifying grain products with folic acid (which the body converts into more natural forms of folate).

How Folate May Protect against Cancer

Researchers have found that folate may protect against cancer by helping maintain the integrity of DNA. According to Dr. Mason, people who have had too little folate in their diets for a long time may have as much as a 50-100 percent higher risk of cancer than people who do consume enough folate.

The right amount of folate seems to be especially protective against for colorectal cancer and may protect against breast cancer in women, particularly for those who consume moderate-to-excessive amounts of alcohol.

The Downside of Folate

Because folate plays a central role in cell division, it may also promote the growth of rapidly dividing cells, such as cancer cells. Although the issue remains controversial, evidence points to the possibility that too much folate may encourage pre-cancerous cells in the body to become cancerous.

But solid research results about folate’s possible cancer-promoting effect remains inconclusive. One thing is clear, however: no evidence exists that people who get folate only from food are at any increased risk for cancer. But getting more folate from supplements might increase the risk of developing cancer, particularly if the supplement amount is too high.

How Much Is Too Much?

Dr. Mason recommends that people who take supplements should make sure that their folic acid does not add up to more than 400 micrograms per day. He also feels that most adults with a healthful diet don’t need to take folate supplements at all (unless an underlying digestive disorder exists that prevents a person’s absorbing folate from food). Since grain products in the U.S. are now fortified with folic acid, he explains, most people already consume enough.

Taking additional folic acid through the use of multiple supplements – in combination with voluntarily fortified foods and federally-mandated fortified flour – could increase the daily intake to more than 1,000 micrograms per day, a level that might increase one’s cancer risk. Instead, Dr. Mason agrees with AICR’s recommendation to eat a diet rich in folate-containing foods, such as dry beans, green leafy vegetables and whole grains.