Diabetes Rates are High and Rising, That Links with Cancer 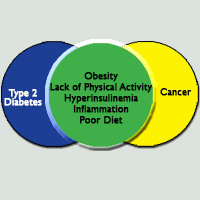 Today, one in eleven adults is living with diabetes and that figure is expected to increase dramatically across the world if action is not taken, according to new estimates from the International Diabetes Federation (IDF). The IDF Diabetes Atlas 8th edition was released yesterday to mark World Diabetes Day.

Along with other serious complications, having type 2 diabetes increases the risk of many cancers. Adults with diabetes have about twice the risk of developing cancers of the liver, pancreas and endometrium. There’s a clear but smaller increase in risk for colon and breast cancers.

The two diseases – diabetes and cancer – share several key risk factors, including obesity and lack of physical activity. The vast majority of diabetes is type 2 diabetes.

Currently, diabetes affects 450 million people, 10 million more than in 2015. By 2045, IDF estimates that one in ten adults will have diabetes, affecting 629 million adults. Diabetes-related health expenditure is expected to be more than $776 billion.

Over 350 million adults are currently at high risk of developing type 2 diabetes. One in two adults with diabetes remain undiagnosed, the report finds. An earlier US government report found that more than a third of American adults are now living with prediabetes – with the majority unaware they have the condition.

The report also notes that diabetes has a disproportionate impact on women, the focus of IDF and its affiliated members in over 160 countries this World Diabetes Day. Over 200 million women are currently living with diabetes and many face multiple barriers in accessing cost-effective diabetes prevention, early detection, diagnosis, treatment and care, particularly in developing countries. Women with diabetes are more likely to be poor and have less resources, face discrimination and have to survive in hostile social environments.

Other key highlights of the report include:

- Two-thirds of adults with diabetes are of working age.

- 12 percent of global health expenditure ($727 billion) is spent on diabetes.

- The North American and Caribbean regions have the highest prevalance of diabetes. Here, 1 in 8 adults have diabetes.

To download the full report and see how diabetes affects various areas of the world, visit IDF's The Diabetes Atlas.