Cancer death rates in the United States continue to drop for all cancers combined as well as for most cancer types, finds a new government report that examined data between 2003 and 2012. While overall positive, the report findings also emphasize the large number of new cancer cases that can be prevented and examines the troubling rise of liver cancers.

The findings are from the “Annual Report to the Nation on the Status of Cancer,” a report by the Centers for Disease Control and Prevention, the North American Association of Central Cancer Registries, the National Cancer Institute, and the American Cancer Society.

For new cancer cases, rates decreased slightly during this time among men, while remaining stable for women. Prevention measures, early detection and improved treatment have all played a role in these overall positive findings, says the report.

Key findings from the report include:

Continued focus on primary prevention efforts to reduce or eradicate risk factors before cancer occurs is critical, the report concludes. Many modifiable cancer risk factors contribute to many types of cancers, including tobacco use, excess alcohol consumption, poor diet, excess body weight, and physical inactivity. Reductions in these unhealthy behaviors and improvements in healthy lifestyles over time can reduce the burden of cancer, the authors write.

AICR research estimates that almost one in three cases of the most common cancers can be prevented by adopting a healthy diet, participating in regular physical activity, and maintaining a healthy weight. Add in not smoking and other preventive measures and the numbers increase to approximately half.

Liver Cancer a Cause for Concern

Key findings from the report include:

Most cases of liver cancer are preventable, according to the report. Hepatitis C is a major contributor to liver cancer as is hepatitis B, obesity, and type 2 diabetes. For hepatitis, the recommendations to reduce cancer risk are early detection, treatment of hepatitis C and using vaccines to prevent hepatitis B. Promoting healthy eating and physical activity were also named as preventive measures in the report.

Obesity and type 2 diabetes can cause cirrhosis, which can progress to liver cancer. Excessive alcohol use is also associated with cirrhosis and the CDC estimates that 8-16% of liver cancer deaths are related to heavy alcohol use. 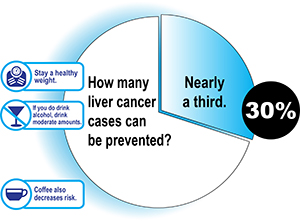 When focusing on diet, nutrition and physical activity with liver cancer risk, AICR/WCRF’s 2015 report also found that excess body fat and alcohol increase the risk of this cancer. The report concluded that drinking an average of one cup of coffee daily reduces the risk.

AICR estimates that if all Americans were a healthy weight, an estimated 30 percent of liver cancer cases could be prevented annually.

Obesity is now recognized as a major cause of 10 common cancers; the link between diabetes and cancer is also well established. Research shows that people with diabetes have a two and a half fold increase in risk of liver cancer. In addition to sharing common risk factors, both obesity and diabetes seem to increase cancer risk related to insulin resistance and a pro-inflammatory bodily environment that may encourage the cancer process.

The Annual Report to the Nation was supported by the Centers for Disease Control and Prevention, the National Cancer Institute, the American Cancer Society, and the North American Association of Central Cancer Registries.

Ryerson AB, et al. Annual report to the nation on the status of cancer, 1975–2012, featuring the increasing incidence of liver cancer. March 2016. Cancer.