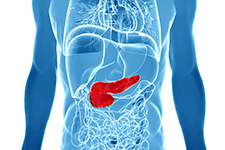 November marks Pancreatic Cancer Month; this cancer is relatively rare but a leading cause of cancer deaths in the United States. While there are many risk factors individuals have no control of for this cancer, AICR/World Cancer Research Fund research concluded that excess body fat is one of the strongest factors increasing risk for pancreatic cancer.

AICR estimates that 19 percent of US pancreatic cancers – about 8,800 cases – could be prevented if individuals were at a healthy weight. This cancer type is one of ten cancers in which excess body fat increases the risk.

The pancreas is an organ tucked deep in the abdomen, behind the stomach. Only about the length of your hand, six inches, the pancreas plays a vital role in digestion and regulating blood sugar.

There are two main types of pancreatic tissues: exocrine and endocrine. The vast majority of the pancreas is made up of exocrine cells that produce enzymes into the small intestine that aid in digestion, such as lipase. The rest are clusters of cells called endocrine cells. These cells, called islets of Langerhans, produce such hormones as insulin and glucagon to help regulate blood glucose levels.

About 95 percent of pancreatic tumors begin in the exocrine cells. There are not usually any symptoms associated with these tumors, making them difficult to diagnose early.

This year, approximately 49,000 people living in the United States will be diagnosed with pancreatic cancer. About 40,000 people will die of this disease. Pancreatic cancer accounts for about 3 percent of all US cancers. It is the twelfth most common cancer, yet the fourth leading cause of cancer-related deaths among both men and women.

AICR’s 2012 report on Preventing Pancreatic Cancer concluded that excess body fat increases risk for this cancer. There was also enough evidence to conclude that drinking coffee – both decaffeinated and caffeinated – has no effect on risk.

The report concluded there was also strong evidence that risk increased with greater height, a marker of the events and processes the body undergoes with growth. It’s important to note that this growth process is influenced by hereditary genes, as well as a combination of developmental factors, such as growth and sex hormones, during development, childhood and adolescence.

According to the Pancreatic Cancer Action Network, key risk factors for pancreatic cancers include:

For modifiable risk factors, stopping smoking and achieving a healthy weight can decrease the risk.

For more on pancreatic cancer risk factors, symptoms and other information visit: