New Obesity Reports and How It Matters for Cancer Risk 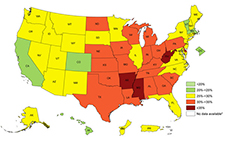 Both US adult and childhood obesity rates have remained relatively steady in recent years, according to new reports, with rates remaining high. That puts millions of adults at increased risk for the most common cancers, including post-menopausal breast, colorectal and endometrial.

AICR estimates that if everyone living in the US were to be a healthy weight, that would prevent an estimated 120,000 cases of cancer a year.

New state obesity maps released by the Centers for Disease Control earlier this month show that every state has at least two of ten adults who are obese. The prevalence of adult obesity ranges from 21 percent in Colorado to 36 percent in Arkansas.

The maps are drawn from the updated Behavioral Risk Factor Surveillance System (BRFSS), an ongoing survey that collects data by phone. Respondents self-report their height and weight, which is calculated into a BMI.  A BMI of 30 and over is categorized as obese.

The obesity epidemic remains one of the nation’s most serious health crises, was the conclusion of The State of Obesity: Better Policies for a Healthier America. Released last week, the report incorporated the updated government data and placed it into context. Released last week, the report from the Trust for America’s Health and the Robert Wood Johnson Foundation reviewed programs that can help prevent obesity, from childhood to adult.

Other highlights of the report include:

By Region and Ethnicities

Although childhood obesity rates appear to have stabalized, rates have tripled since 1980. Prevention among children is key.

"It is easier and more effective to prevent overweight and obesity in children, by helping every child maintain a healthy weight, than it is to reverse trends later. The biggest dividends are gained by starting in early childhood, promoting good nutrition and physical activity so children enter kindergarten at a healthy weight," the report notes as one of the major lessons.

Another lesson that has emerged, the report concludes, is that healthy people need healthy communities. Reducing rates of obesity, will require a greater focus on prevention.