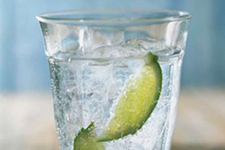 For those working to lose weight, drinking two cups of water before a meal may help increase the loss by a small but significant amount, suggests a new randomized study that adds to the research on potential effective and simple strategies for weight control. The study was published last month in Obesity.

The 12 week study randomized 84 obese adults into two groups: one group was asked to drink two cups of water 30 minutes before meals and the other was given a disguised procedure, asked to imagine their stomachs were full 30 minutes before eating meals. All participants were given a half-hour session on weight management strategies and all received a follow-up phone call later to gauge how closely they were following their plan – either water drinking or stomach imagining. Everyone was also sent text message reminders and participants completed questionnaires about compliance throughout the study.

The intervention group participants were given reusable water bottles and discouraged from drinking soda water, sparkling and carbonated waters.

Both groups lost weight, but the water drinking group lost, on average, approximately 3 pounds (1.3 kilograms) more than those who imagined full stomachs. About one-third of those in the water drinking group reported that they followed instructions to drink the pre-meal water before each of their three meals. People in this subcategory lost an average of 8 pounds more than those in the same category, who reported not drinking water before eating or only drinking it once per day before meals.

It's possible that the comparison group's disguised effect may have had unintended effects where they actually ate more, the authors note. And they caution that a long-term trial is important before reaching any firm conclusions on the effectiveness of this strategy. How drinking water before a meal may help is unclear, they add, and future studies are needed on this topic.

The study was funded by the Scientific Foundation board of the Royal College of General Practitioners and the European Hydration Institute.