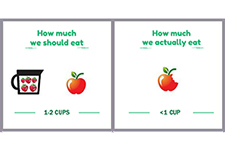 Only about one in ten American adults are reaping the many health benefits that eating the recommended amounts of fruits and vegetables provides, according to new government data release last week.

The report by Centers for Disease Control and Prevention (CDC) found that on average only 13 percent of Americans are eating the recommended amount of fruit, and 9 percent their vegetables. According to the dietary guidelines, an adult consuming 2,000 calories per day who is active fewer than 30 minutes daily should be eating 1.5-2 cups of fruit and 2–3 cups of vegetables daily. The report used 2013 state and national survey data to calculate their estimates.

For lower cancer risk, AICR recommends a plant-based diet high in fruits and vegetables. Fruits and vegetables contain numerous vitamins, minerals and other phytochemicals studied for their cancer-preventive properties. Consuming high amounts of these foods also may help with weight control, an important factor given that overweight and obesity is a cause of ten cancers.

Because fruit and vegetable consumption affects multiple chronic diseases, increasing demand and consumption is important, the report notes. Improving intake for adults may begin in childhood. During 2007–2010, 60 percent of children consumed less fruit than recommended and almost all (93 percent) consumed fewer vegetables than recommended, according to an NCI report cited.

Healthier diets earlier in life might lead to better practices later in life, and places where children learn and play can have an integral role in improving intake, the report concludes.

The study was funded by the International Agency for Research on Cancer, World Cancer Research Fund and government agencies from European countries (see study for full list.) See more.

Singh was supported by a training grant from the National Institute of Diabetes and Digestive and Kidney Diseases (DK007703) and a K00/R00 Pathway to Independence Award from the National Heart, Lung and Blood Institute (1K99HL124321).Initial data collection for this work was supported by a grant from The Bill & Melinda Gates Foundation to the 2010 Global Burden of Diseases study. See more.