Almost Half a Million Cancers Worldwide Due to Obesity 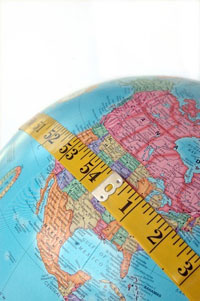 Almost half a million cancer cases worldwide are due to the rising rates of overweight and obesity, making many of the most common cancers potentially avoidable, according to a study published in The Lancet Oncology online last week.

The study was funded in part by the World Cancer Research Fund (WCRF) International, of which AICR is a member.

Researchers in The Lancet study calculated that  481,000 – 3.6% – of all new cancer cases in adults worldwide were attributable to high BMI in 2012, the latest global data available.

Obesity-related cancers are more likely to affect women than men, largely due to endometrial and post-menopausal breast cancers, according to the study. In men, excess weight was responsible for 1.9% or 136,000 new cancers in 2012, and in women it was 5.4% or 345,000 new cases.

The study grouped countries into 12 geographical regions. Almost a quarter of the obesity-related cancers around the world – 23% or 111,000 cases – occurred in North America. The sub-Saharan African region contributed the least: 7,300 cancers or 1.5%.

The study analyzed BMI prevalence in 2002 and cancer incidence in 2012, using a 10-year span that they call a “lag period.” The perception is that excess bodyweight does not initiate cancer, they write, but promotes cancer. Research they cite suggests that follow-up time of 10 years shows that weight loss reduces risk of subsequent cancer risk.

Study authors then calculated the cancers potentially avoidable had populations maintained the mean BMI recorded 30 years earlier, in 1982, finding that approximately a quarter of cancer cases related to high BMI in 2012 were attributed to the increase in BMI.

Researchers used the cancers that WCRF and AICR reports link to overweight and obesity. The obesity-related cancers include colorectal, post-menopausal breast, ovarian and pancreatic. ( Earlier this month, a report released by WCRF International and AICR added advanced prostate cancer to the list of obesity-related cancers for the first time.) Study researchers used global and country-specific data to estimate the percent of cancers caused by obesity.

If the current pattern of weight gain globally continues, note the authors, the burden of cancer will continue to increase, especially in regions such as Latin America, the Caribbean and North Africa, where the largest increases in obesity have occurred over the past three decades.

Along with World Cancer Research Fund International, support for the study was provided by European Commission (Marie Curie Intra-European Fellowship), Australian National Health and Medical Research Council, and US National Institutes of Health.