With little variation by state, about one third of US adults and teens report eating fruit less than once a day, finds a recent Center for Disease Control (CDC) report. And about a fifth of adults say they eat vegetables less than once per day.

Overall, adults in the U.S. are eating fruit an average of just 1.1 times per day, and serving themselves vegetables only 1.6 times per day.

The 2013 CDC’s State Indicator Report on Fruits and Vegetables used self reports for fruit and vegetable intake for each state. 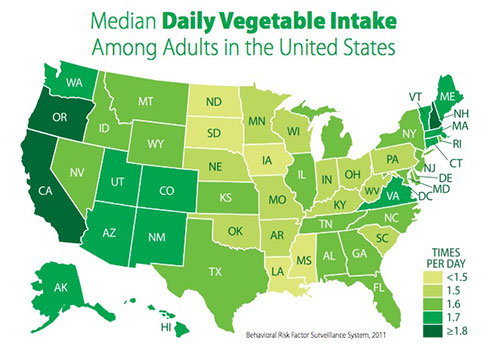 Vegetable and fruit intake per day ranged only slightly by state, for both adults and teens. Residents in Iowa, for example, said they ate vegetables slightly more than once a day; and Oregonians on average said they were eating vegetables almost twice a day. Residents in all other states reported eating fruits and vegetables at levels equal to or between those ranges.

Center for Disease Control. State Indicator Report on Fruits and Vegetables for 2013. June 2013.