Shedding Light on Veggies May Make Them Even Healthier 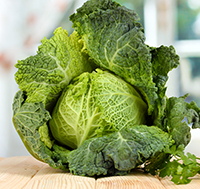 Anew study focusing on cabbage suggests your purchased vegetables might produce more anti-cancer phytochemicals if you expose them to the natural light-dark cycle they have in nature. The study was published online last month in Current Biology.

Study researchers hypothesized that after cabbages are picked, the plants natural circadian rhythms will lead to the plant producing more of the phytochemicals that repel insect attacks during the day than at night, when predatory insect activity is less. The researchers focused on the plant defense photochemical glucosinolates. Vegetables with high levels of glucosinolates, especially cabbage and other cruciferous plants, also have high levels of sulforaphane, a phytochemical in broccoli and other cruciferous vegetables studied for its anti-cancer affects.

Using cabbages purchased from grocery stores, the researchers exposed cabbage leaves to 12 hours of a light-dark cycle for a series of days. They found that these cabbages showed a clear circadian regulation and increases of one type of glucosinolate called 4MSO, a phytochemical identified as having anticancer and antimicrobial benefits. Cyclical glucosinolate accumulation was largely lost in cabbages maintained under constant light or darkness. The authors concluded that the 12-hour light/dark cycles may provide as much as 2- or 3-fold more 4MSO phytochemical if you were to eat the cabbage 4 to 8 hours after starting the light period compared to if the vegetable were under constant light or darkness.

When both groups of cabbages were exposed to a common insect predator, the cabbages that did not have the systematic light exposure had less resistance to the insects.

The authors noted that other vegetables and fruits – cabbage, lettuce, spinach, zucchini, sweet potatoes, carrots and blueberries – may also continue to produce phytochemicals in response to daylight.