Click on drawing for larger version
with microbe totals.

Love Thy (Inner) Neighbors: How Our Microbes May Affect Our Health

The human body is a repository of microbial cells that outnumber the cells of their human host by a factor of ten. Many of these microbes – bacteria, fungi, and protozoans – live on our skin and in our eyes, nose, and lungs. But most are found in the intestinal tract where they are collectively referred to as the gut microbiota.

A mounting body of evidence suggests gut microbiota can contribute to both acute and chronic disease as well as certain metabolic conditions, many of which link to cancer risk. At the annual Experimental Biology (EB) conference last week in San Diego, scientists presented the recent findings.

The human body is a super-organism, a multispecies consortium composed of both microbial and human parts, said Jeffrey Gordon, MD, Director of the Center for Genome Sciences and Systems Biology at the University of Washington at St. Louis, during his presentation at EB. No two individuals share the same microbiota but there are similarities across family members, as well as age and cultural groups.

Most of our lives we live in happy coexistence with our microbial partners in what often is described as a symbiotic relationship: host and microbes benefit one another. The human host provides a warm, oxygen-free environment conducive to microbial growth and in turn, the microbes help maintain intestinal and immune health and play important roles in nutrient synthesis and absorption.

The numbers of microbes grow along our gastrointestinal tract, Gordon noted, with the fewest found in the mouth and stomach and the largest numbers found in the colon.

A growing body of evidence suggests there may be a link between one's microbiota and the tendency toward obesity, a known risk factor for cancer. The mechanisms by which the microbiota influence one's risk for obesity are not well understood. Recent findings from Gordon's lab have shown that lean mice have far more microbes than obese mice. This may indicate that a lean mouse's microbiota metabolizes more nutrients.

Another hypothesis presented at EB is that our microbes or their metabolic byproducts affect they way our body senses nutrients and feelings of fullness.

In one study, presented at a poster session at EB, researchers at the French Institute for Agricultural Research (INRA) transplanted the gut microbiota from obesity-prone and obesity-resistant rats into germ-free mice. Mice in each group were fed either a high fat diet or a standard-calorie diet. 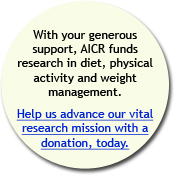 These findings suggest, the study concludes, that certain types and numbers of microbes have the potential to increase one's risk of weight gain when overeating.

Like many studies in the field of microbiota and heath, results are preliminary and more studies are needed. And as scientists noted, the research in the microbiome field is only beginning to answer the many questions about our microbiome's role in human health.